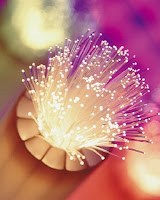 PC Magazine is reporting that Verizon is looking for cheaper alternatives to their standard fiber to get more Fiber-to-the-home (FTTH) deployments at a further distance. A possible answer might be less fiber (!?!).

It seems that fewer strands might be the cost differentiator - if Verizon can deliver FTTH, even at slower speeds, they can reach more (rural) households than they had originally planned.

So far, Verizon has spent in excess of $20B to deploy FiOS. This is more than AT&T has spent on their U-Verse service, which delivers fiber to a neighborhood node (FTTN) and copper from then on. In addition to being cheaper, it's also considerably slower once consumers demand higher speeds (which they will).

In a related story, Verizon has announced that they intend to upgrande speeds to FiOS subscribers next week. According to the press release,

"In remarks prepared for delivery today at the NXTcomm conference here, Verizon President and Chief Operating Officer Denny Strigl announced that the company is expanding its industry-leading FiOS Internet connections of 50/20, 20/20, 20/5 and 10/2 Mbps across all of Verizon's FiOS Internet service footprint in 16 states."