Nexus One gets FCC Approval 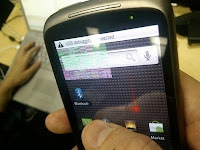 By now you have likely heard all about the new rumored Google smartphone, code named "Nexus One". Even though it is still officially in the "rumor" phase of development, the FCC has nonetheless approved it. The phone that could possibly change the entire wireless telephone sales model will likely be available in the 1st quarter of 2010.

Wireless Week Nexus One gets FCC OK on GSM bands
Posted by Dan Gallant at 10:05 AM