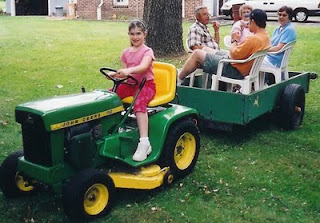 Here's an interesting story from USA Today - Virginia based Lightsquared is proposing to build out 40,000 new cell towers in rural areas. On the face of it, a really good thing. But it turns out, this may be a hindrance to GPS signals which farmers rely on to guide their tractors, among other things. So a fight is on, championed by none other than John Deere who makes many of those tractors. From the paper: "Deere chairman and chief executive officer Samuel Allen has aligned the manufacturer with military and aviation interests against a broadband proposal...Allen said LightSquared's proposal...would push the global-positioning systems in farmers' tractors and combines further down the band, compromising movements across the fields."

John Deere Fights Against Cell Towers that Disrupt GPS: http://www.usatoday.com/money/companies/2011-07-24-john-deere-cell-tower-fight_n.htm?csp=obnetwork
Posted by Dan Gallant at 9:51 AM