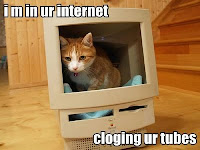 The Washington Post reports that a startup called M2Z Networks has been trying to create a means to blanket the nation with free broadband. Finally nearing the end of a 3-year struggle to implement the plan, they were thwarted by opposition including wireless carriers and the Bush Administration. Apparently, the Democrats are trying to delay a planed vote by the FCC on remaining spectrum until the new administration takes control. The theory being that Obama actually uses technology and presumably understands how it would value our country.
Startup banks on making money from free broadband - washingtonpost.com
Posted by Dan Gallant at 12:18 AM

I really have been surprised that we can not work together to achieve broadband wireless. I have been really excited by the possibility of high-speed access anywhere I go and I can't wait until we have it. How is M2Z's network going to be different from WiMax? Is it similar?