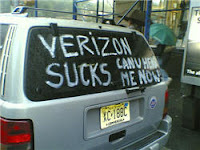 I suppose it was inevitable. Losing all that landline business can't leave you feeling good; what's a CEO to do? Ditch it, apparently. Ivan Seidenberg, the chief executive of Verizon Communications declared during a Goldman Sacks call that Verizon was simply no longer concerned with telephones that are connected with wires.

Also an interest from a rural perspective: Seidenberg announced that Verizon is selling off most of its operations in rural areas and is spending billions to wire most of the rest of its territory with its fiber optic network, or FiOS.