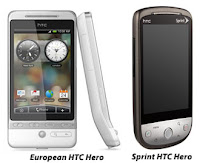 Sprint will be offering it's first Android device, the HTC Hero, on October 11. This should come as no surprise, as rumors of this phone have been circulating for, what seems like, months. Nevertheless, it's nice to see another carrier besides T-Mobile offer a phone on the Android platform.

According to Google, there will be no fewer than 28 Android devices that will drop in 2009 in the US. This seems like a high number, but I suspect it includes netbooks and tablets as well. Android is a highly versatile, open-source OS, so I would not be surprised if it were to become one of, it not the dominant phone OS in a few years.

Oh I know, I know...you are probably screaming about your precious iphone or Blackberry. "What about them!" you are thinking. Here's the diff - for all their claims to the contrary, they are largely proprietary OSs. They have also been created to sell hardware. None of this is true with Android. Not only is Android open-source and carrier and device agnostic, but it's also FREE! This third point helps keep the cost down and is very attractive to carriers. I should also mention that it's rock-solid and works well (and did I also mention that it's free?).

The only thing I can see on the horizon that would keep Android down would be Chrome, Google's browser that's about to become an OS as well. Unless they somehow merge these two, an internal war at Google over which OS should prevail will determine it's fate. Otherwise, you may want to start shopping for a hero!
Posted by Dan Gallant at 1:36 PM