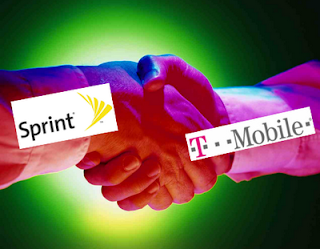 So here's the latest: According to Bloomberg, there is a rumor that Sprint Nextel (NYSE:S) and Deutsche Telekom have been in talks to merge T-Mobile USA with Sprint. The deal would give T-Mobile parent Deutsche Telekom a major stake in the new company.

This is not a new rumor, but it leaves lots of questions/reasons that make me doubt it:

1) Sprint has been rumored to be sold, or merged, for YEARS. Ever since the company fought off the MCI buyout (we're talking 2000 here) the stock price has been artificially buoyed by one rumor after another.

2) Sprint has no cash. any merger they participate in will have to use its assets as their part of the deal. Those that remember the Clearwire (NASDAQ:CLWR) deal will recall that's Sprint's end was their spectrum licences. A buyout by Sprint is likely out of the question.

3) Incompatible technologies - Sprint is a CDMA carrier, using WiMAX as its 4G strategy. T-Mo is a GSM carrier usingUMTS and HSPA+ as it's 4G delivery mechanism. Not to mention Sprint's Nextel network - iDEN, that was never merged into the greater Sprint network. Running three separate networks will be prohibitively expensive and confusing for customers.

To be fair, here's how it could happen:

1) Both companies are doing poorly, compared to their rivals AT&T and Verizon. A merger could give them a fighting chance in the US (particularly with help from the German parent).

2) Although their technologies are dissimilar, both WiMAX and GSM networks have migration paths to LTE, a 4G technology currently being used by Verizon. With the right network planning, these networks might be using the same tech someday.

Meh, I'm still going with "no"