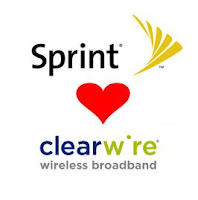 Very interesting. On the heals of the (up 'till now) unsuccessful "Xhom" project, and following the announcements from both AT&T and Verizon to do 4G on LTE rather than WiMax, Sprint is going full throttle into WiMax. According to USA Today and other sources, Sprint is forming a new company with Clearwire to roll out nationwide WiMax beginning next year. The new publicly traded company will be called Clearwire (how clever!) and has many important investors such as Google, Intel, Comcast and Time Warner. If nothing else, this deal signifies that WiMax is far from dead as many analysts had speculated. If anything, the opposite.

Sprint and Clearwire will be contributing the WiMax spectrum, while the other partners are putting up the cash.

For Sprint, this deal makes a lot of sense - They already have plenty of spectrum when they initially invested in MMDS (turns out, an unworkable technology). This spectrum, as it turns out, is perfect for WiMax. With their stock languishing in the $8 range, they need partners for the cash to buildout any network. As a result, despite other carriers going in a different direction for 4G, Sprint really needs to stick with WiMax and having Google and Intel (both big WiMax supporters) on board, they've also created a market for the product as well.
Sprint, Clearwire to build national Wi-Max network - USATODAY.com
Posted by Dan Gallant at 10:29 AM