ZeeVee: The Beginning of the End for TV? 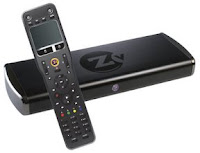 Gizmodo is discussing a product on it's site called "ZeeVee". Devices like this may really be the future of television - the ability to move video content from the PC to the TV.

Simply marrying the two devices was clearly not the answer; we've seen attempts at that before (Web TV for example). The PC (or a PC-like device) is more likely to be the center of the home with video and other data moving to other appliances, including the TV.

Eventually, the TV goes away and the "computer's" monitor is the Video content delivery device. I will expand on this topic later but in the meantime, please read the Gizmodo article:

ZeeVee: One Box to Broadcast PC's HD Video All Over the House:
Posted by Dan Gallant at 11:18 AM