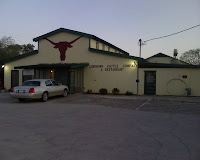 On the recommendation of a friend, I traveled to the Longhorn Cattle Company and Restaurant, somewhere on the outskirts of Harlengen, TX. This place has all the charm of an open-air barn. They've been in business for what seems like forever judging from the decor (or lack thereof). As expected, the food was excellent and highly representative of the region.

This place is known for two things: Steak and Barbecue, and they do both well. All the Q is Mesquite smoked, while the steaks are grilled over a mesquite fire (not charcoal). Mesquite is the local hardwood and it grows everywhere. While plenty of eastern pitmasters would rather die than put mesquite in their smokers, South Texas thrives on the stuff. I personally love the taste of mesquite as it has a noticeable, smokey flavor. BBQ in Texas rarely includes pork, but being the fan of babybacks that I am, if it's on the menu, I'm ordering it. The ribs were served dry, with a fall-off-the-bone quality that's hard to fake. The only noticeable flavor was mesquite. The sauce served with it was tomato based and served warm - it was heavenly. Sides included charo bean "soup", cole slaw and a potato salad with relish and BBQ sauce in it (odd, but good).