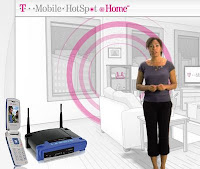 According to the New York Times, T-Mobile USA will be launching a home phone and a tablet PC based on Google's Android platform. The carrier will sell the home phone in 2010 and the tablet PC shortly afterward, according to documents the newspaper obtained from one of T-Mobile's partners.

Supposedly the device will plug into a docking station and will be coupled with another device that will synchronize data for the phone while it charges the phone's battery. T-Mobile did'nt comment on the specific devices mentioned in the report, but did confirm that it plans to introduce more Android-based devices.

As for the tablet PC, the report said the gadget will have a 7-inch touchscreen and no physical keyboard. Users will be able to do basic computing tasks and manage data on different home devices.
According to FierceWireless, "If confirmed, the new products would cement T-Mobile's image as the most Android-friendly carrier in the United States. It already offers HTC's G1, the first phone in North America based on Android, and will, in all likelihood, launch the HTC Magic, HTC's second Android phone. In addition, T-Mobile likely will also offer a Samsung Android-based phone."
Here are some of the different sources: New York Times, Engadget article, FierceWireless, Gizmodo
Posted by Dan Gallant at 2:29 PM