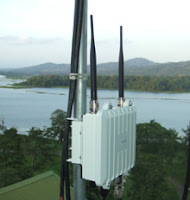 Technology Review is reporting that Intel has has found a way to move a Wi-Fi signal over a distance of 60 miles. It's designed to send a signal from a city to outlying rural areas. According to the article:
"The wireless technology, called the rural connectivity platform (RCP), will be helpful to computer-equipped students in poor countries, says Jeff Galinovsky, a senior platform manager at Intel. And the data rates are high enough--up to about 6.5 megabits per second--that the connection could be used for video conferencing and telemedicine, he says.

The RCP, which essentially consists of a processor, radios, specialized software, and an antenna, is an appealing way to connect remote areas that otherwise would go without the Internet, says Galinovsky. Wireless satellite connections are expensive, he points out. And it's impractical to wire up some villages in Asian and African countries. 'You can't lay cable,' he says. 'It's difficult, expensive, and someone is going to pull it up out of the ground to sell it.'"

The point-to-point technology requires two nodes which could provide full back-end infrastructure for less than $1,000.