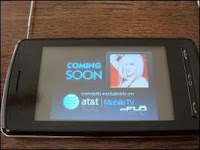 RCR Wireless news has learned that AT&T's MediaFlo service is further along than they had announced.

Supposedly, LG Electronics Co. (maker of the two available handsets) has let it slip. Once they got their hands on one of the devices, RCR was able to get the service working fairly easily. According to RCR:

"From what we've seen, we think AT&T has a solid broadcast mobile TV offering that can compete and perhaps outpace the reach of Verizon Wireless' Vcast Mobile TV. With the concerts channel and (hopefully) more services like datacasting on the way from MediaFLO, mobile TV just might strike the chord it's failed to strum thus far."